Taiwanese are proud of their food.  Though I love the dining options we’ve got here, there comes a point when you get sick of hearing “you have to try this intestine”, or “this pig blood and these chicken testes are delicious!”  I’ve even caught myself, recently, dreaming of a nice niçoise salad or peanut butter that separates.  As for service, I know it’s à la mode these days to eat like the locals, but you might not find it comfortable to eat à la highway on a metal stool with mopeds splashing rainwater onto your feet.  There’s a lot more in Taipei than what you see on the street, so don’t worry if that’s not what you’re into.  There’s definitely something in Taiwan’s capital for you.

Breakfast briefs: In the mornings, a popular Taiwanese breakfast is fried bread sticks, wrapped in bread.  If you don’t want to overload on carbs, or if you’re craving scrambled eggs without oysters, try Wendel’s German Bakery & Bistro.  Wendel’s offers a good Western-style sit-down breakfast, and unlike most other “Western restaurants” (and even many hotels), it opens by 8:00AM.  Wendel’s offers baguettes that aren’t milky and spongy like most bakeries in Taipei, a simple continental breakfast for NTD$190, and a “Heidi Klumm Breakfast” of eggwhites, fruit, with a bread basket for NTD$260.  The Da An branch is near the Sun Yat-Sen Memorial MRT train station, with two other shops in Tienmu and Neihu.

Lunch munchies: If you’re not in the mood for dumplings or noodles for lunch, many stands on the street sell sandwiches for about NTD$50.  These sandwiches aren’t like the ham and cheese sandwiches your mom packed in your lunchbox for school.  Think of kung pow chicken with lettuce and mayonnaise on spongy white bread.  Some people like it.  Some people don’t.  For a truly western tradition, try Smith & Hsu.  A complete English afternoon tea set for 2-4 people comes to NTD$1280, with scones, Devonshire clotted cream, English farm jam, tea jelly, cakes, cookies, small sandwiches, and 2 pots of tea.  When you first come in, they bring out a selection of over a hundred artisan teas for you to smell before you order at any of their 6 branches throughout the city.

Delectable dinners: Anyone and everyone you meet up with in Taipei will try to take you to the night markets.  Around 5pm in the afternoon, certain streets all over the city start to get closed off.  By 8pm, it’s hard to imagine what these streets might have looked like during the day without the rows of food carts and throngs of people milling about.  Though night markets offer some exotic and finger-licking flavors – including fried stinky tofu, snake blood shots, and sweet shaved ice with red beans – you could shoot the Taiwanese sequel of “Supersize Me” if you ate at the night markets every night.  I recommend you try the Ningxia Night Market near the Zhongshan MRT station because it’s less touristy than the Shilin Night Market, and also because it seems to be where all of my local gay friends are going these days.  For a nice sit-down dinner that won’t give you a heart attack, try Kao-Chi, Kiki, and Din Tai Fung.

Though these three are all chains, they’re not like your (below) average Olive Garden.  According to a Taiwanese friend, opening multiple restaurant branches in Taipei is a sign of quality, not of mass production, or mass appeal.  Din Tai Fung has received international acclaim (including a Michelin star) with its famous soup dumplings. Locals are willing to brave notoriously long lines for a sip.  That said, there are plenty of family restaurants worth trying as well.  One of my new favorites is called “My 灶” – which translates simply to my kitchen.  The owner is a friendly chubby chef eager to show off his homemade sauces.  He not only makes some of the best self-proclaimed Taiwanese dishes (as opposed to “Chinese”– don’t get him started on the politics) in the city, but his English is good enough to explain to you what’s what.  Or, if you don’t want to ask about the secret ingredients,  I recommend Mi Cocina, a new American restaurant near the Taipower Building MRT Station.  Chef Lisa Nolasco adds her Brooklyn flavor and sass to her dishes, which include zucchini lasagna (NTD$280) and pan-roasted chicken breast (NTD$350). 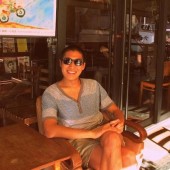 Great to know ya, Sequoia